Tips to keep your feet healthy and comfortable in the mountains

It is important to use footwear that fits the shape of your foot. We have to adapt to our boots or shoes little by little, with short outings at the beginning, and tie the laces properly, with the foot well positioned from the toe to the ankle to avoid possible injuries in descents.

The sock has to fit well to the foot, so it is convenient that it has bands of adjustment both in the foot and in the ankle, which will prevent wrinkling or displacement causing blisters. The thickness of the garment must be in accordance with the type of footwear used on each occasion. For hard and high boots it is advisable to use socks with a high density structure, while for soft and flexible footwear it is advisable to use fine fibers with low density. Socks with towelling on the sole help to cushion the foot while the perspiration zones help to regulate the temperature of the feet and reduce perspiration.

One of the main causes of blisters or extreme cold is moisture retained in the feet. There are fibers that wick away moisture and dry quickly. If your feet feel wet, it is important to keep moving because your own body heat will contribute to the evaporation of the water, or to change your socks at the end of the activity.

The functioning of thermal fibers is based on the retention of body heat. It is therefore essential to put on socks with warm feet. In case we are going to remain static or it is impossible to put on the sock in a warm environment, it is advisable to use natural fibers, mainly Merino wool, as it retains heat quickly and efficiently.

To avoid discomfort, socks without seams or with soft seams should be used.

Semi-compression socks are ideal for reducing muscle impact. Semi-compression helps to improve blood circulation, which improves the temperature of the feet as well as helping to stabilize the ankle.

We should wear comfortable boots and it is advisable to wear socks with special reinforcements that cushion the constant rubbing of the boot against the skin.

They appear due to constant and repeated friction of the skin with other material. The most common causes are the use of inadequate footwear or the constant movement of the sock when walking. To reduce the risk of blisters it is advisable to wear a sock that fits well to the foot -with Lycra fiber- or a double sock that works as follows: the outer sock absorbs friction, while the inner sock protects the skin.

Acute inflammation of the plantar aponeurosis of the foot, resulting in pain in the sole or heel. One of the ways to reduce the pain caused by plantar fasciitis is to use a sock with a Designed Terry sock placed in the arch area which helps the sole of the foot to rise up simulating an arch and therefore reducing the direct impact of the foot strike on the sole of the foot.

Pain in the metatarsal area is common in runners and hikers as this area of the foot supports the weight of the whole body when walking or running, as well as receiving various impacts due to the uneven terrain. A solution to this pain is to use socks with engineered terry in the metatarsal area that soften the footprint and protect from impacts.

Foot odor is caused by a series of bacteria that proliferate with humidity, i.e. sweat. To prevent the appearance of this type of bacteria, there are several intelligent fibers: MERYL, CUPRON, X-STATIC, TECHNO.P.E SILVER or DRYTEX ANTIBACTERIAL WITH SILVER, which prevent the appearance of bacteria and therefore significantly reduce odor problems. These fibers contain metals, such as copper or silver, which help skin renegation, helping us to keep our feet healthy and clean during intense activities. 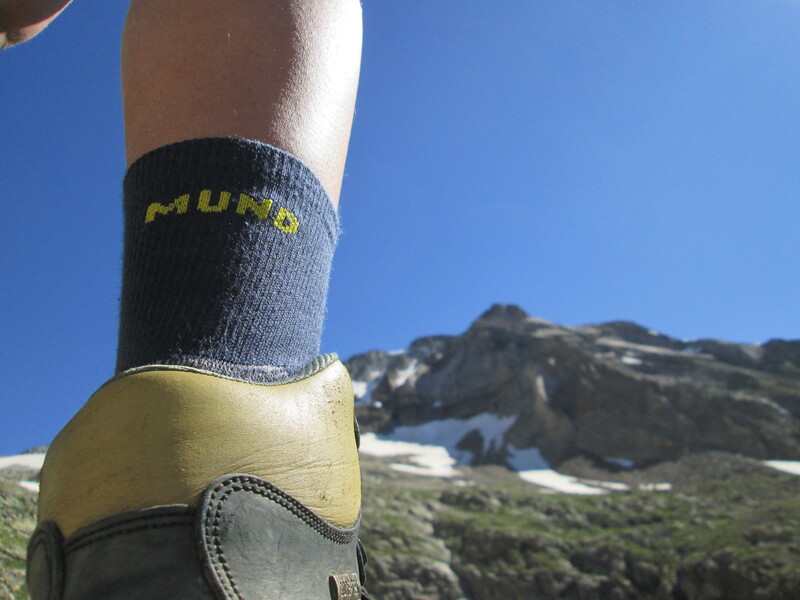